Powered by positivity: proven ways to increase happiness at work

Workplaces are turning work into fun by harnessing the power of positive psychology to boost their employees’ mental wellbeing.

When American management academics Professor Joyce Bono and Theresa Glomb studied the effect of the ‘Three Good Things’ happiness intervention (which asks participants to list three things they’re grateful for every day), the large cross-section of healthcare workers in their study experienced lower stress levels and mental and physical complaints after three weeks.

Positive psychology advocate, Alex Dawson, has been on his own journey. After 15 years working in major multinational corporates, he’d grown weary of the lip service paid to happiness in workplaces. Mental wellbeing, he says, was always included in his employers’ vision, mission and goal statements, but when it came to measuring those goals it inevitably disappeared from the picture.

“We’d review all of those other results, but you’d never see a slide saying: ‘Did we have fun?’”

When Dawson asked that question in a meeting, the answer he received was not what he was expecting. The leader of the business replied that “yes, of course we were having fun, because we were hitting all our numbers.”

There, in a nutshell, was what Dawson sees as one of the most damaging notions in the modern workplace.

“The assumption that people are happy and feel supported, nurtured and fulfilled in their work just because the numbers are being met is endemic in the corporate world. It’s fundamentally wrong.”

"If you have a terrible boss or a job you don’t like, the fruit bowl just isn’t going to cut it."

Positive psychology is a branch of thinking founded by eminent US psychologist Martin Seligman in the 1990s which promotes thoughts and actions that facilitate happiness, such as gratitude, humour, empathy, creativity, patience and mindfulness.

Supported by extensive research, the beneficial effects of positive psychology on individuals and groups is finding its way into the workplace.

In Australia, Dawson is among those leading the charge. Not long after his ‘aha moment,’ he left his executive role and went to the US to study Shawn Achor’s Happiness Advantage Training, one of the world’s largest positive psychology training programs.

Last year, Dawson founded his Sydney consultancy Positive Scenario, the first to deliver the Happiness Advantage program to Australian organisations. His mission: “to make workplaces in Australia the happiest, most positive workplaces in the world.”

Dawson’s workshops are designed to embed positive psychology right into the fabric of an organisation, with the ultimate goal of having teams build positive practices into daily work routines “so everyone experiences shared moments of positive emotion in the course of doing their job.”

This method is a major step forward, he says. “The typical approach to improving workplace culture is perks-based: a free fruit bowl, massage, coffee, dress-down Friday. But they’re all things that are separate to your daily work experience. If you have a terrible boss or don’t like your job, the fruit bowl just isn’t going to cut it.” 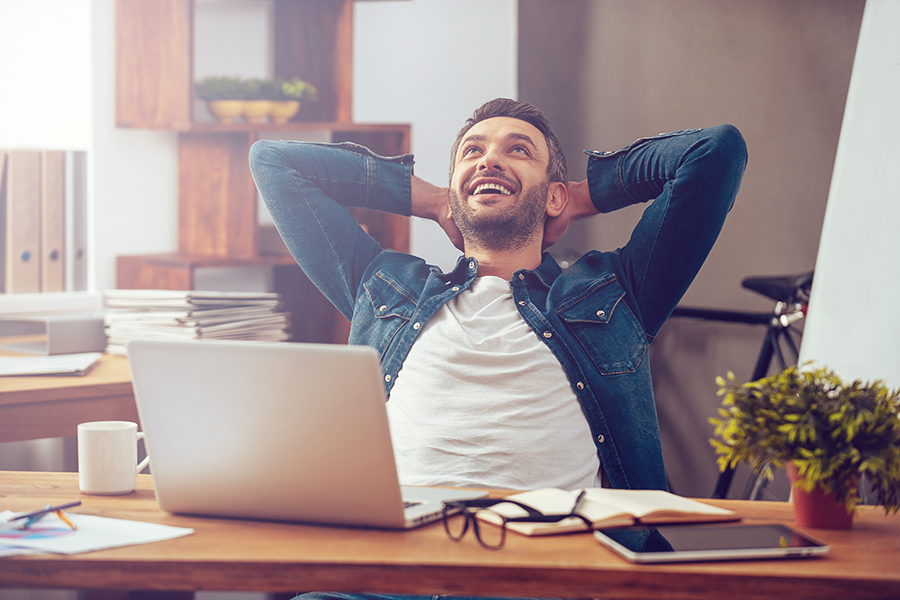 Another advocate for the power of positive psychology is SuperFriend, a national mental health organisation focused on creating positive, healthy and safe working environments.

Their guides, Promoting Positive Mental Health in the Workplace and Building Thriving Workplaces, are used widely in Australian workplaces and promote positive practices such as altruism, laughter, appreciation of others and ‘savouring positive work experiences.’ Gratitude is key, and participants are encouraged to reflect upon the good things that happen at work each day, and to thank others for their positivity.

“Positive workplace cultures clearly value their workers by not just preventing harm, but by protecting and promoting positive mental health and fostering an environment that gets the best out of its people, and builds strong brand value,” she says.

“As human beings, we’re preprogrammed to always be looking out for problems because it kept us alive back when we were in caves. We have to make an effort and train ourselves to make positivity a habit.”

For those wary of the concept, optimism can seem at odds with business pragmatism, but the two can co-exist, he says.

“When we talk about a resilient thinking style, we're not talking about delusional, Pollyanna optimism. It’s realistic optimism: it’s been a challenge, but tomorrow will be a better day.

Even if that doesn’t convince, says Alex Dawson, positive psychology’s effect on the balance sheet certainly will.

“One of the stats I love is that purpose driven companies that put people, planet, profit as their three priorities in that order, have outperformed the market by 206 percent in the last 10 years,” he says.

“Positivity ripples out, it builds and grows. You see a small critical mass and then it snowballs.”