Corporations are commissioning original artworks to install on their premises, and artists welcome the trend.

Both the developers of office buildings and the tenants within are employing artists to decorate foyers, boardrooms and walls. The owners of these buildings want to make a visual statement, but they also want to help their customers' employees and visitors to relax, to ponder, and get lost in another world for a minute or so.

“I like the fact that commercial buildings introduce artwork for the public’s enjoyment, and that clients are aware of the extra dimension art adds to the environment,” says Sydney artist Marion Borgelt.

“Commercial buildings can be cold and austere, and art has the potential to change that.”

Borgelt’s long career has seen her sculptures, paintings and installations displayed on the walls of commerce in such countries as China, Myanmar, US and, of course, in Australia. Her choice of materials includes beeswax, glass, pigment and stainless steel in addition to the more conventional wood and stone.

“The briefs I receive can be open or restrictive,” she says. “It depends on the client and how the artist interacts with the community and the building.” 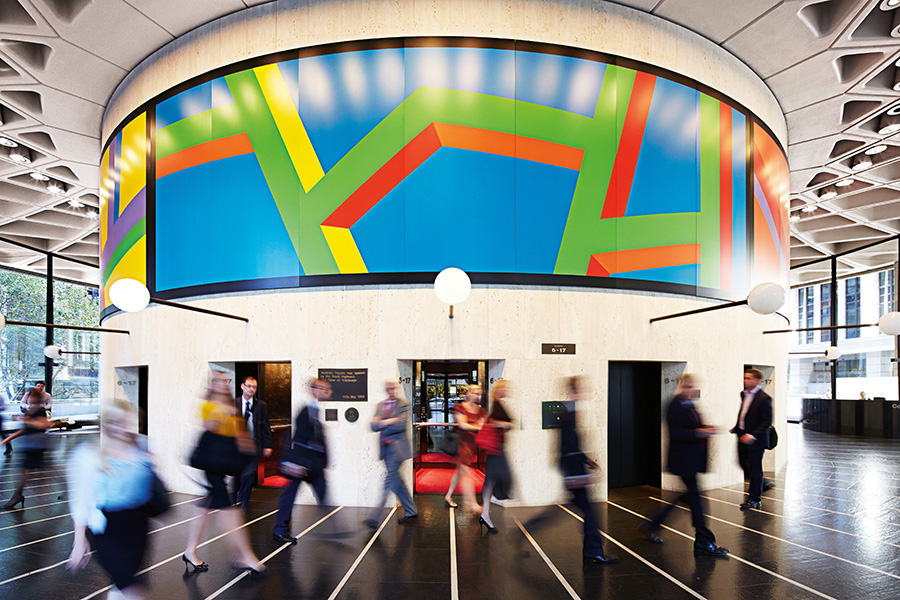 A vibrant mural by Sol LeWitt adorns the foyer of Australia Square.

A glance back through the history of Australia’s buildings reveals that art has been a factor for almost 50 years.

In 1968, Harry Seidler commissioned a sculpture for Australia Square by renowned American sculptor Alexander Calder. Crossed Blades has become a striking established feature of the building’s plaza area described by Seidler as an ‘open but contained space’ like the town square in a medieval city.

Taking the art inside, in 2003 Seidler commissioned a mural by New York Artist Sol LeWitt to showcase international works of art at Australia Square. The striking and colourful mural wraps around the core of the building can be seen when entering the building at street level or approaching from the plaza at the rear of the building.

Angus devised a large-scale cast aluminium sculpture installed at the top of the broad curving steps at the building’s entrance on the corner of Bent and O’Connell streets in the heart of the city's financial district.

The sculpture is a complex network of three-dimensional ellipsoidal surfaces drawn from shapes expressed in the design of the building. The form is enhanced by a brightly painted colour scheme, which traces the underlying geometry. 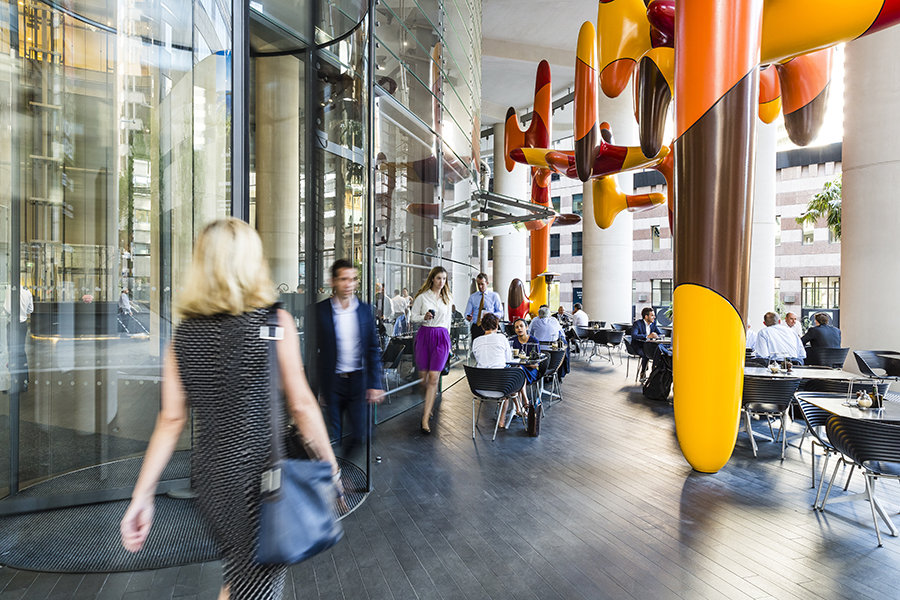 Asquith is an enthusiastic supporter of the trend towards more contemporary art in corporate spaces.

“I think that art in public spaces contributes to society’s cultural infrastructure, and I feel that corporations benefit from it, too,” she says.

“It is great to see big corporations around the world and in Australia embrace art as part of their mandate. Macquarie, BHP, Wesfarmers, Deutsche Bank and UBS are just some of the companies that display art, and use it to entertain staff and clients.

“They’re all aiming to achieve different things, but I think that it bodes well for the Australian art community, and the general public, that artists are adding to the fabric of the business world.”

A space for the imagination

480 Queen Street, Brisbane is a recent addition to the group of commercial buildings with major art installations. The commission is one of the largest of its kind for a commercial office building in Australia.

Brisbane artist Danie Mellor has made an artwork which deploys immersive imagery to wrap itself around the space, incorporating the heights of the forest canopy and simulating thick and lush undergrowth spiralling up the walls of the building.

The artwork allows a visual journey to unfold for people travelling on the 30 metre escalator from street level to the building’s public parkland on level 4, all the way imagining they are surrounded by a rainforest.

The presence of indigenous people and the native flora and fauna in the piece hint at a parallel world, asking the question: are we in their space or are they in ours?

And that is the purpose of the art on display in commercial buildings. It wants to get occupants and visitors to think differently about the spaces they inhabit, and inspire them to approach their own work with a more open mind.

“Only 20 years ago this wouldn’t have happened,” says Matthew Johnson, a Melbourne-based painter. The underlying compositional structure of many Matthew Johnson paintings is repetition – grids, geometric patterns, stripes or sequential arrangements drawn from nature.

“Now we have a lot more dialogue between architects, designers, landlords and of course artists,” he says. “Even councils are involved now with commissioning artwork, and that augurs well for the future.

“What is great is that now we are seeing areas of the city and beyond where [formerly] artists would not be engaged in or associated with the area,” Johnson says.

“We are using space, light, shadows and vision in our work to change the make-up of a city.” 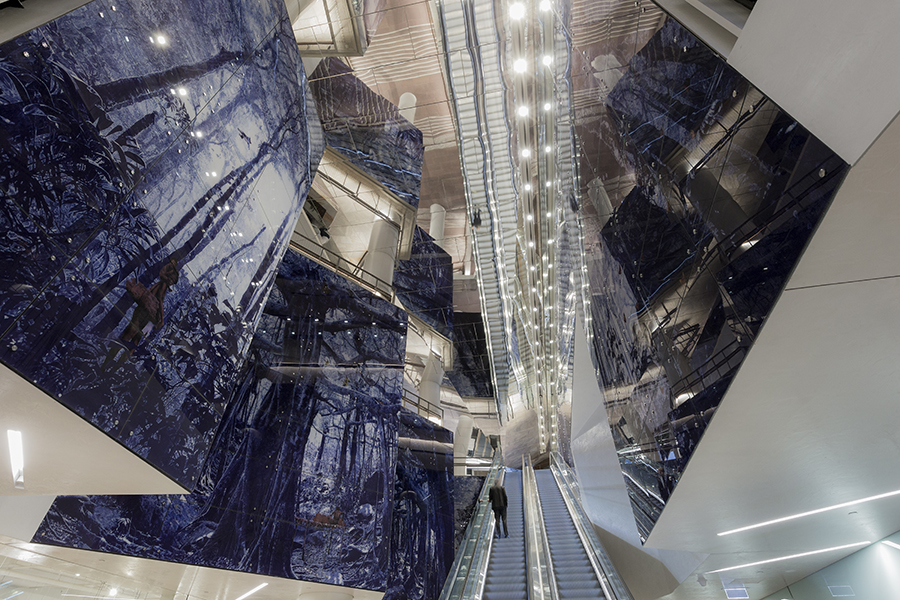