Knowledge is power: How data is driving better workplaces

Does your workplace have enough meeting rooms? Are people using the break-out spaces? Is it time to move to a new building? These are just some of the questions that Artificial Intelligence-enabled data sensors and workplace strategists are helping organisations to answer, making their workplaces more effective.

The cost of the corporate office, whether owned or leased, is the second or third biggest expense for most organisations, after staff costs and the organisation’s energy footprint.

Yet global studies show that only 60 percent of the workplace is used at any given time.

As well as meaning a lot of money is being wasted, at least as importantly, it means there is huge potential for workplace spaces to be more effectively used to improve the employee experience.

Think about the frustration of not being able to find an available meeting room through the booking system, but then you walk around and find nobody is using them.

“Statistics and data have been around for ages, but they only get you so far - it’s what you do with them,”

Data collection then and now

While previously organisations might have collected information manually, by a staff member walking around recording observations on a clipboard, these days employee engagement surveys might be one of the tools used to gauge how different parts of the workplace are being used. Some businesses take it a step further, using BlueTooth and Apps, or access passes which record when a space is being used.

In 2016 Alex Birch co-founded XY Sense, a business which developed occupancy sensors driven by Artificial Intelligence to collect data about how workplaces are used and when.

“It was spawned from the realisation that there is real demand from organisations to know how their real estate is being used, and how to use it most effectively,” Birch says.

The AI-enabled occupancy sensors take images of workplace spaces and converts them to X and Y coordinates.

For anyone born last century, it might sound a bit Big Brother, but Birch guarantees that no images are ever saved.

“Nothing leaves the sensor other than anonymous X, Y coordinates,” Birch says 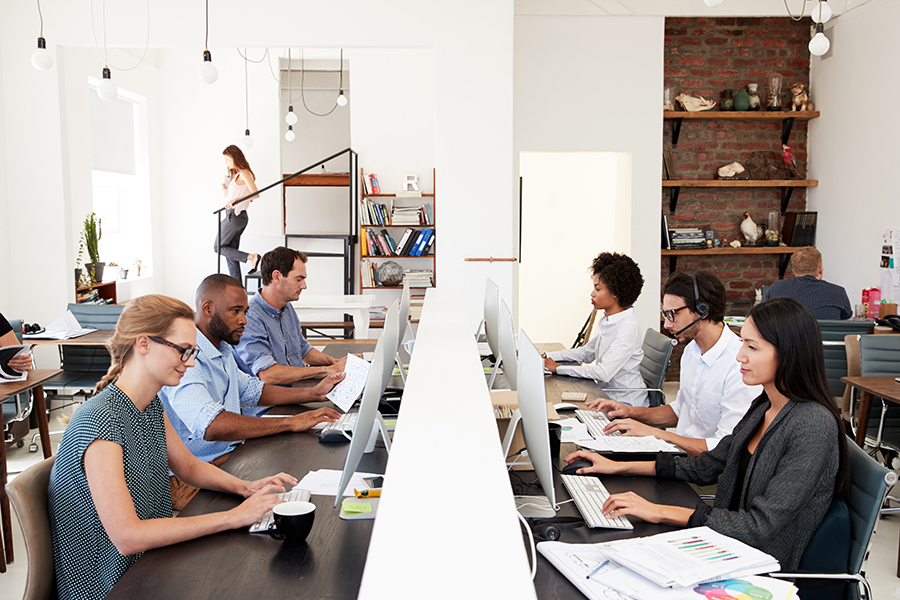 It’s what you do with it

As the Head of School of Computing and Information Systems at the University of Melbourne, Professor Uwe Aickelin, points out Artificial Intelligence isn’t new. It wasn’t even new when he did his PhD on it more than 20 years ago – except in those days it was called Computational Intelligence or CI.

But he recognises a growing demand for his services providing secondary data analysis, to mine the data and transform it into something meaningful and valuable.

One way he is using data is to protect students in danger of dropping out before they get to that point – by keeping track of attendance records and grades.

But while more and more organisations are collecting data, he questions how many are optimising the data they collect.

“Statistics and data have been around for ages, but they only get you so far - it’s what you do with them,” Aickelin says.

“A huge amount of data is being collected, but just having data isn’t enough,” Lim says.

At Six Ideas by Dexus, Lim uses multiple sources of data, including from XY Sense occupancy sensors, as evidence to inform decision-making about workplace strategies and change management, to improve the way people work and learn.

While the end result might be good for the business bottom line, she is interested in optimising the workplace to align it with organisational goals and strategy, with a focus on place rather than merely management consulting.

“In thinking about your workplace, you need to think about what you want to achieve as an organisation, how you need to behave to get to that aspiration, and what the enablers are,” Lim says.

“For example, if your workplace is moving from a hierarchical structure to a flat structure, but you have lots of corner offices, that environment is continually reflecting the old hierarchical, status-driven structure.”

One organisation thought they wanted to move to a particular building and called in Six Ideas for advice.

“Upon evaluating the building against what they wanted to achieve as an organisation, we recommended that they re-purpose their existing building, rather than move,” Lim says.

Lim highlights the purpose a head office serves:  Is it to provide a facility for individual work such as responding to emails - possibly after a lengthy commute - or would it be creating a collaborative workspace and strengthening the organisation’s culture?

“A workplace needs to be about more than accommodating computers,” she says.

Currently, Lim is working with Aickelin, helping support the transition to Melbourne Connect, which will be a new home for the Melbourne School of Engineering.

This entails making sure the benefits of the new space are properly communicated so its future tenants can optimise their use of it. Through interviews, focus groups, events and surveys, she’s collecting data to understand their preferences, concerns, what’s working and what’s not. Together this will inform decision-making on how the new workplace will be used.

It’s all a long way from the clipboard.