Good office design takes Generation Z preferences into account when creating great spaces. But members of older generations like the changes, too.

Generation Z is coming of age. Thousands of what’s also known as the iGen are starting to enter the workforce, and for these tech savvy under-22 year olds, it means finding a job that is challenging, financially rewarding and that can be done when, where and how they want.

How are employers and organisations meant to greet this new wave? According to Nielsen’s Total Audience Report, Gen Z makes up about a quarter of the world’s population – and it’s unlike the previous demographic. The test will be how businesses create a work environment to attract and keep the best of the new breed of talent.

For starters, human resources commentators generally agree that Gen Z workers show a preference for interaction with peers in person. This is something MinterEllison senior partner Virginia Briggs has seen first hand.

“Unlike the Gen Yers, who are very enamoured with technology and almost go out of their way to communicate via text or messaging, I think because Gen Z have grown up with digital communication, it’s not novel or new, it’s just part of their DNA,” Briggs says.

Along with an increasing number of organisations, Briggs recognises that it is the role of the office to create spaces where their workers can interact face-to-face, more organically, and more regularly.

Commonly referred to as the 'bump factor', office designers and organisations are focusing on the power that a workspace has to induce spontaneous interactions between peers, both within their own work groups but also between colleagues who work in entirely different divisions.

It’s why Yahoo took the well publicised and controversial step of banning employees from working from home, in order to bring everyone back into its physical office space. CEO Marissa Mayer wanted people from accounts getting morning coffee next to software engineers, or marketing specialists having lunch on the same table as quant analysts.

For Briggs, the design of MinterEllison’s Governor Macquarie Tower office space is an ideal layout to encourage the same effect. “The space creates the desire for people to move,” she says, referring to the long views from one end of the office to the other, broken by a central open staircase that runs between all eight levels of the firm’s premises.

Despite the traditional vision of lawyers chained to their desks in individual offices, the reality is now far different, as both the nature of the work, and the workspace changes. 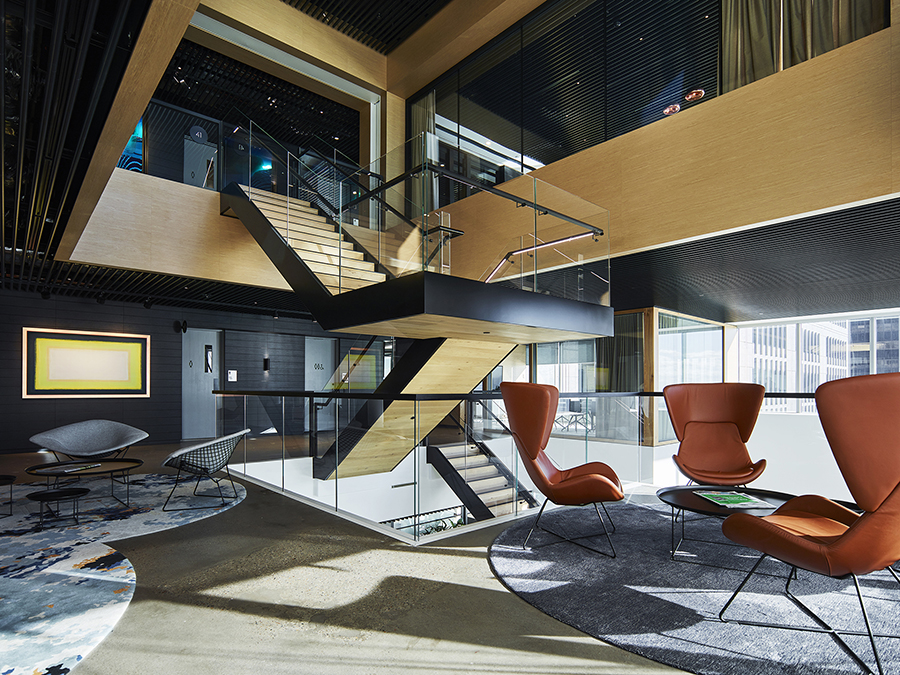 A sense of togetherness

Briggs says people walk around more to speak to colleagues, they mingle and they make use of breakout spaces designed to encourage collaboration and connectivity, including a dedicated internal cafe.

“One of my favourite experiences was hearing the cheer go up from staff gathered at the level 39 cafe when the Marriage Equality Legislation was passed in Parliament,” she recalls.

“It reverberated right up and down the staircase so you actually got this fantastic vibe connecting through the whole firm. That tied into our philosophy that we really want people to be able to bring their whole self to work. Marriage equality is very important to us, and the building really facilitated that vibe in terms of bringing our office together in Sydney as a community.”

Dropbox Australia New Zealand country manager Tony Ward says the huge amount of research being done on the way future generations want to work has identified purpose, creativity and collaboration as driving factors for the next generation of tech savvy workers.

“With this in mind, the physical office environment as well as the technology underpinning it plays a huge role in attracting the next generation,” Ward says.

“Organisations should build work environments that break down barriers and are conducive to cross-collaboration. They should also leverage technology that facilitates knowledge sharing and flexible working.”

"One of my favourite experiences was hearing the cheer go up when the Marriage Equality Legislation was passed."

Encourage use of favourite tech tools

Ward also sees value for innovative leaders to be looking at the technology within their organisation and embracing a bottom-up approach to innovation as a means of engaging a younger workforce that is already using an array of tech tools, devices and apps in their personal lives.

“[Look] at which technology tools employees are embracing in their private lives and assess whether these can be formally adopted into the working environment, with the right security controls wrapped around them to keep company data safe,” he says.

For MinterEllison, the transition to an open, tech-enabled workplace was adopted pretty quickly, Briggs says, by old and young.

“They use tech like my generation would have used the phone,” she says of the office’s youngest members.

“It’s not instead of, it’s an enabler, and the research we’ve done particularly around Generation Z is that, while they are absolutely connected through technology, they prefer to communicate face to face.”