Modern office buildings are so much more than bricks and mortar, as new designs push the boundaries of sustainability, wellbeing and architecture to create living communities. Here are five of Australia’s best.

Pearce’s ‘biomimicry’ design principles follows the laws of nature - and CH2, with temperature controls and ventilation inspired by the efficiencies of a termite mound, reduces power consumption by 85 per cent.

In 2020, CH2’s groundbreaking air-cooling system is more valuable than ever.

“Conventional HVAC systems need to recirculate the same air six times to save cooling energy, but CH2 does not recirculate air at all. The 100 per cent fresh incoming air is cooled by radiance from the night cooled ceiling and chilled ceiling panels.” Pearce says.

He adds: “The indoor air quality in CH2 has always been voted its most popular feature by occupants, but it’s more important than ever as we battle the COVID-19 pandemic.”

“It remains one of Melbourne’s best Green Star icons through its innovative design and construction. The design promotes a more interactive role between the city and nature, more like an ecosystem in which all parts depend on each other.”

“One Central Park… demonstrates not only how innovative sustainable buildings can be, but also how strikingly beautiful.”

The Annex, 12 Creek Street: a building that breathes

This beautiful building’s green spirit is embodied by lush foliage cascading from its rooftop gardens, overhanging the upper levels and adding an organic landscape to the city skyline.

The poster child of Brisbane City Council’s Buildings That Breathe urban design plan, The Annex celebrates a strong connection to the outdoors and the history of its Brisbane CBD site, where a creek once flowed and three 130-year-old fig trees still stand.

Architects BVN imagined The Annex as a fourth tree, with canopy, trunk and foliage elements woven into the design of the 12-storey ‘vertical village’ of workplace neighbourhoods.

Natural light and fresh air fill its spaces, from the Sky Terrace with Brisbane River views to the alfresco meeting spaces and terraces and the communal ground floor plaza positioned with living greenery and foliage motifs. 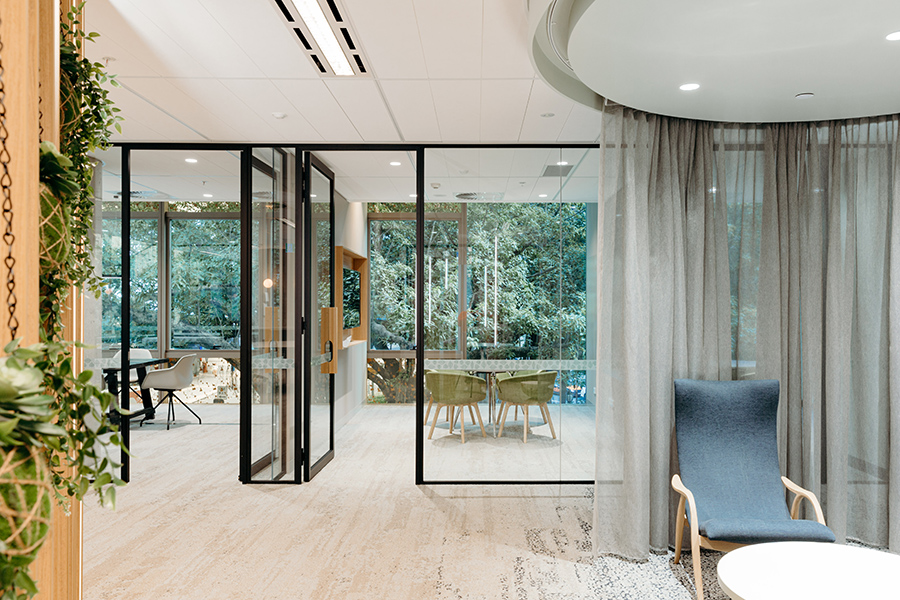 Inside The Annex, 12 Creek Street in Brisbane

One Central Park: green inside and out

In 2013, this stunning green landmark on Sydney’s Broadway transformed the cityscape with its spectacular integration of natural and built environments.

Vertical gardens by acclaimed artist and botanist Patrick Blanc cover more than half the mixed-use building’s two towers with 1,120 square metres of 38,000 indigenous and exotic plants, at heights of up to 116 metres.

But the greenery isn’t just for show. The plants help reduce energy consumption by trapping carbon dioxide and emitting oxygen, while the building’s heart is as green as its exterior, with an onsite water recycling factory and power plant aiming to save the equivalent of 136,000 tonnes of greenhouse gas emissions over 25 years.

“One Central Park, incorporates onsite power tri-generation, passive solar design and leading water management systems, which demonstrates not only how innovative sustainable buildings can be, but also how strikingly beautiful, with its living tapestry of plants, flowers and vines,” Nicole Sullivan says.

Locals know this two-year-old commercial tower in Sydney’s Parramatta as ‘the one with the rooftop soccer pitch,’ but there are many more reasons to love the 12-storey, 25,000sqm headquarters for the NSW Department of Education.

Other green credentials include an ultra-efficient LED lighting layout, fins for shading on the façade, and healthy building materials used throughout.

This thirty-storey, egg-shaped commercial tower soars above the Westfield Sydney CBD retail centre in curvy contrast to its angular neighbours. The nature-inspired silhouette hints at the tower’s sustainability status; it has a GBCA 6 Star Green Star rating and the development boasts one of Australia’s largest urban blackwater recycling systems.

The tower respects its neighbouring green spaces, with the top levels designed by John Wardle Architects to maximise floor space while minimising overshadowing of nearby Hyde Park.