Why we need to tackle working mother guilt

Female participation in the Australian workforce is growing but the statistics don’t tell the full story; they mask the guilt working mothers feel.

The rate of female participation in the Australian workforce increased in January 2019 to a high of 60.7%. And the Department of Jobs and Small Business has projected strong increases in female full-time employment over the next 5 years. According to Griffith University sociologist, Dr Judy Rose: "Any mother breathing has felt mother guilt. It’s a phenomenon that can’t just be dismissed.”

Add a job or career into the mix and, as Ariana Huffington put it: "While all mothers deal with feelings of guilt, working mothers are plagued by guilt on steroids".

Serena Williams expressed her working mother guilt on social media when she missed a milestone for her daughter: “She took her first steps... I was training and missed it. I cried.”

In 2013, online Australian childcare resource, careforkids.com.au, surveyed 2,500 Australian mothers and found that a third of mothers felt guilt and that it was the hardest emotion to deal with when returning to the workforce.

But as we enter 2020, why is working mother guilt still a thing?

"While all mothers deal with feelings of guilt, working mothers are plagued by guilt on steroids".

Rose recently published a paper, ‘Never enough hours in the day: Employed mothers' perceptions of time pressure’, which explores the time pressure and stress associated with juggling work and family often leads to feelings of guilt for mothers, but not fathers.

She talks about the greater ‘mental load’ mothers carry, caring about the family that continues 24/7, even when they are at work.

For her, working mother guilt ebbs and flows, but she says: “I don’t know why we are made to feel guilty. It’s me who’s putting pressure on me and making me feel guilty.”

But what is making women feel this way?

Rose suggests the 1950s, middle-class model of ‘a good mother’ who stayed home to look after the family, despite many of them being gainfully employed during World War 2, is partially to blame for the ‘mother’ guilt that employed women with children still feel today.

Professor Lyndall Strazdins of the ANU is reported as dating it to 1904 when the decision about how to set a minimum family wage was made. It was based on supporting a wife and three or four children, with the implicit notion that women would do everything else that was needed.

Wherever its genesis lies, most agree that working mother guilt seems to be more prevalent than it was a generation ago.

Perhaps it’s due to having access to a lot more information which can lead us to question ourselves more, perhaps it’s because women these-days are becoming mothers a bit later in life, after years of independence and achievement… and often having had little to do with newborn babies.

As some have put it, we have a “Hallmark version” of the maternal ideal.

And as Rose says, mother guilt comes from feeling that you’re not living up to society's unrealistic expectations of what a 'good' mother should be.

Then there are the often-conflicting surveys and statistics…

According to a survey by the Pew Research Centre in the US, around 60% of adults believe that children are better off when one parent stays home. But also in the US, a study by Harvard Business School found that adult children of working mothers are not only high achievers in their professions but are happy as well.

Fleming recognised that, for her, guilt was fed by comparisons.

Fleming also believes in the power of a strong support network.

“I think it’s important to have a good community around you to tell you you’re doing a good job, and having someone to say “I did the same” to normalise the challenges of motherhood,” Fleming says.

She remembers that before she returned to work she sought advice from others. When she suggested to one that it was “all about sacrifices”, she distinctly recalls being told to adjust her thinking and re-frame it as ‘trade-offs’.

Fleming also thinks timing is a factor in reducing guilt, including ensuring the transition back to work occurs when the mother and child are ready. She had originally planned to return to work after 11 months, but at about 9 months she realised she wasn’t going to be ready, so pushed it out to 13 months. 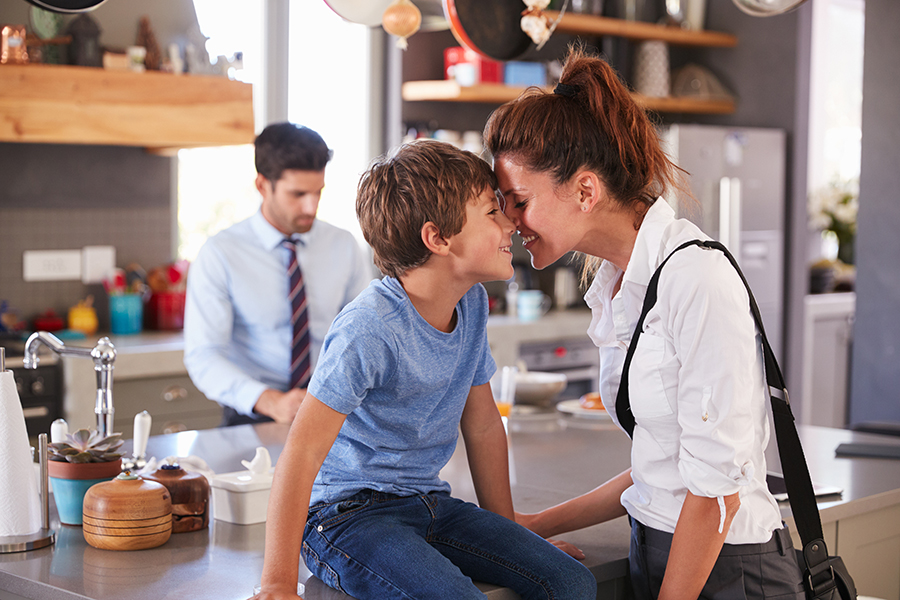 During her maternity leave, she worried about how returning to work was going to be. But …

“On the first day, I have to admit to skipping through the city. I felt like part of me was back. I was very excited and I am still,” Fleming says.

Indeed, Rose found that some mothers spoke about work as being a place where they get a break.

“A 15 minute rostered morning tea break is 15 minutes undisturbed that they wouldn’t get at home,” Rose says.

And yet that too – the realisation that they are enjoying being at work – can also feed guilt.

So, what’s the solution?

She notes that the Australian government Dad & Partner Pay is only for two weeks, and that while men are entitled to seek flexible work arrangements there is still a stigma associated with it, and those who do, are in the minority.

“We need managers to say ‘I’ve got children and I want to work four days’. If men see their boss or manager doing it, perhaps they’ll feel brave enough to ask and it will become common-place,” Rose says.

Dexus offers 12 weeks paid parental leave to both men and women, with a range of benefits and tools available to  support new parents as they prepare for, undertake and return from leave. To rebuild a new parent’s confidence on their return, Dexus provides all primary parental leavers with access to 1:1 coaching and tools from an organisation called Parents At Work, a tailored program supporting parents in the workplace.

Another initiative helping parents ease back into work, is priority childcare.

A partnership between Dexus and Guardian allows Dexus employees and customers to place their children at the top of the waitlist at any Guardian centre.

But the silver bullet, according to Rose, is an equally shared parenting model.

She has just co-authored a case study which will be published in 2020, which looks at a couple who are providing just that: they have three children and each work 30 hours per week while sharing childcare and housework tasks equally between them.

“For them it’s not about motherhood or fatherhood, it’s just about parenting. Guilt doesn’t have any oxygen in that relationship.”