The pursuit of knowledge: how a life of learning can make us healthier and happier

Books are the secret weapons of successful people. But there’s more to be gained from a daily reading habit than material wealth.

Facebook’s Mark Zuckerberg is a famous advocate of lifelong learning. His annual personal challenges ‘to learn new things and grow outside my work’ have included studying Mandarin, visiting every US state and, in 2015, reading a book every fortnight.

“You don’t really start getting old until you stop learning,” Microsoft founder Bill Gates has said. Gates commits to a daily hour of reading, devouring 50 books a year – a mere snack compared to the literary consumption of the Carlyle Group’s billionaire founder David Rubenstein, who claims to devour six books a week.

From Oprah Winfrey, head of the world’s biggest book club, to Warren Buffett, who reportedly spends 80 per cent of every day reading, to icons as diverse as Walt Disney, Audrey Hepburn and Winston Churchill, voracious readers rule the world.

"Learning gives us a goal and a purpose, which contributes to positive wellbeing."

Australians don't need a tycoon to convince them to read.

According to an Australia Council for the Arts 2017 study into this nation’s reading habits, we're already eager bookworms.

The research illuminated a strong reading culture, with nearly nine in ten Australians choosing print books. On average, we read more than three books each month and spend five hours a week reading, with nearly 70 per cent wishing they could read more and almost three-quarters believing books make a contribution to their life that goes beyond their cost.

Dr Wendy Were, Australia Council for the Arts’ Executive Director, Strategic Development and Advocacy, declared the research a resounding endorsement of a vibrant literary culture.

“The vast majority of Australians really value reading,” she said.

“Reading opens doors to new worlds, allowing us to explore new landscapes and to experience the world from the perspective of another. Importantly, in an increasingly automated world, reading helps us to better understand what it means to be human.”

When journalist Rosemarie Milsom was motivated to create the Newcastle Writers Festival by a sense that the community craved more engagement with books, she was proved right.

Now in its seventh year, the festival has seen steady annual audience growth of 15 percent. “For me, the impending demise of books was grossly exaggerated,” says Milsom.

“As humans, we are innately drawn to stories – telling them and receiving them. Reading also makes you stop. You can't multitask and read a book.

“And in a way, the Writers Festival taps into that love of reading and fulfils a need to come together, to listen to one another and to have considered conversations - not to yell at each other in 280 characters or less on Twitter.”

One of the Australia Council study’s most telling insights was that we read simply because we love to. A hefty 95 percent of Australians said they read for pleasure or interest, with relaxation and stress release the most common reason.

Research conducted by UK cognitive neuropsychologist David Lewis has revealed that reading for just six minutes can reduce stress by 68 percent. Books were proven the best stressbuster, outperforming listening to music, taking a walk or having a cup of tea.

Health and wellbeing psychologist Dr Marny Lishman says: “Reading slows us down and puts our body into a relaxed state which is effectively homeostasis – when our stress response is turned off and our relaxation response is on.”

Reading brings further wellbeing benefits, she adds. “Learning actually gives us a goal and a purpose, which contributes to positive wellbeing.
“From improving confidence, self-worth, memory and self-esteem to reducing anxiety, depression and stress – the effects are numerous. And improving the mind will flow onto improving physical health.” 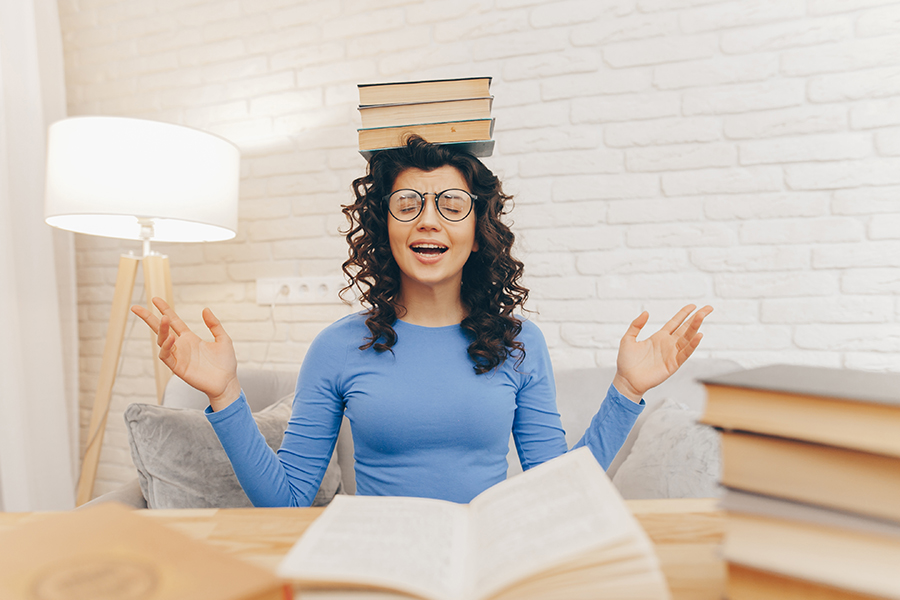 There are also links between learning, longevity and cognitive health. In 2012, US researchers found that the brains of elderly people who had engaged throughout life in cognitively stimulating activities contained lower levels of a protein implicated in Alzheimer’s disease.

Research from the UK’s Centre for Longitudinal Studies found that reading for pleasure in childhood appeared to exert a long-term positive influence on vocabulary development up to the age of 42, and that those who continued reading in adulthood experienced larger vocabulary gains between adolescence and mid-life than non-readers.

A 2016 study published in the journal Social Science & Medicine revealed book readers live an average two years longer than non-readers. Compared to non-readers, those who read for up to 3.5 hours a week had a 17 percent lower risk of dying over the next 12 years.

Says Marny Lishman: “There is the saying ‘use it or lose it.’ Neural connections will prune away if they are not used, which can cause cognitive decline. The more you use your brain, the more neural connections are strengthened.”

All these findings strengthen what science also suggests about the pursuit of knowledge: it’s one of our deepest instincts.

Humans are hardwired to learn. Studies on primates by neuroscientists have shown that acquiring new information stimulates the brain’s reward mechanisms in similar ways to our key drives for food and sex.

In the eighties, psychologist George Miller coined the term ‘informavores’ for the human mind’s life-affirming, evolutionary successful hunger for information. It seems we love to learn because we need to.

“There are so many wellbeing benefits to life long learning … I think a lot of people would benefit psychologically and physically if it was written as a doctor’s prescription,” says Dr Marny Lishman.