Sydney on the way to becoming a top tier global city


In the next ring you have the contenders. Among them is Sydney, a striving metropolis which stands proudly alongside San Francisco, Amsterdam, Toronto, Madrid, Los Angeles, Chicago, Washington DC, Beijing and Shanghai.

It’s rarefied air to share and quite an achievement when you consider the likes of Berlin, Miami, Barcelona and Moscow remain on the outside looking in.

But is that good enough?

For the past three years, Professor Clark and his team at The Business of Cities have benchmarked Sydney on behalf of The Committee for Sydney to determine the answer.

“In 2017 we observed that Sydney had come to form part of a high performing second tier of 10 elite global city ‘contenders’, all vying to join the top table of seven cities that have established global functions and enjoy the greatest global reach.

“Sydney has now cemented its position in the contender group.”

“Sydney invests in real estate, not innovation. The knowledge economy needs some work.” Professor Greg Clark, The Business of Cities

Professor Clark said at the launch of Sustaining the Advantage: Benchmarking Sydney's Performance 2018 that there is exceptional long-term demand for investment in Sydney, which he declared is the leading financial centre in the southern hemisphere.

He said the “infrastructure surge has given confidence to the investor community” – hence the inflow of capital, expertise and staff.

But he warned that infrastructure development spending must be maintained to ensure Sydney, at the very least, maintains parity with its global competitors.

“Infrastructure investment is absolutely right at the core of investment attraction. Sydney has to stay with it, it has to be near permanent thing.” 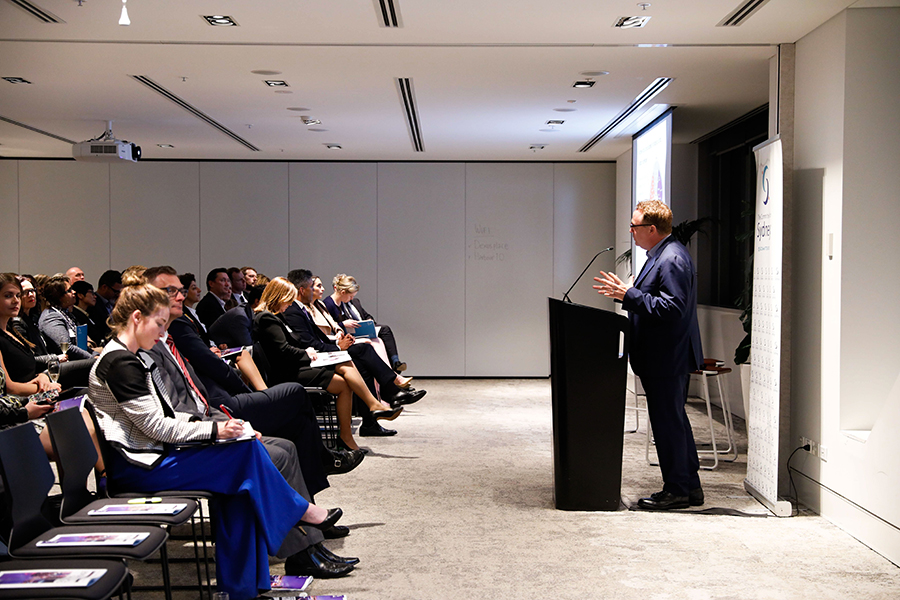 Professor Greg Clark at the launch of Sustaining the Advantage: Benchmarking Sydney's Performance 2018 at Dexus Place

The performance of Sydney’s higher education sector was also a highlight.

“Sydney has excelled in terms of its high education performance, both as an export market success and in terms of research quality,” the report said.

“The data also highlights the way that international students are increasingly playing an ambassadorial role for Sydney, contributing to its positive brand.

This city’s attractiveness to students overtook Vancouver, Toronto and Hong Kong. But there’s no time to rest on these results, said Clark.

“Now is the time to develop a strategy for higher education in Sydney.”

However, Clark highlighted a downside to the exporting of education as a commodity, saying he “feared that Sydney’s universities are becoming a hostage to the tourism industry” and that this could impact on their role in underpinning research and tech innovation.

He also expressed concern about the link between educators and industry – it needs to be stronger – and addressed in passing the need for affordable housing in Sydney for students and young people entering the work force.

“Sydney is a high earning, high cost city and the risk is that it’s too expensive to attract entry level talent and will fall behind in the innovation economy.”

On this subject he was quite vocal: “Sydney invests in real estate, not innovation. The knowledge economy needs some work.

The report said there needs to be incentives for entrepreneurship, greater affordability for startups and more availability of risk capital.

Beautiful but not exciting

Clark said Sydney’s reputation has lost some of its lustre: “Sydney is a magnetic city but not an exciting city.”

“The city is regarded as a global leader for the beauty seeker, the transient visitor, the baby boomer and the retiree,” according to the report.

“But it is not especially well regarded for its smartness and hospitality, while it is perceived to be significantly lagging in terms of nightlife.

“The concern is that unless Sydney can improve its performance and perception in these areas, it will not be able to attract and retain the best young workers or be able to host the innovation economy and the jobs it provides.”

Sydney needs to sell itself better and develop a new narrative, according to the report. To do this effectively requires three inter-locking components:

“The path to a more rounded identity is understood by many cities, but few of them have the advantages that Sydney brings to the challenge.”