Are electronic bikes the new car?

Commuters are always looking for new ways to beat the traffic. Could environmentally friendly e-bikes be the way to go?


Fiona Campbell can list her e-bike’s many practical advantages: it’s clean, efficient, comfortable, affordable, healthy. But the feel-good factor has been an unexpected bonus.

As Campbell rides her eight-kilometre commute between Sydney’s Lewisham and the CBD, motorists chat and admire her cargo bike at traffic lights. When she recently spotted a fellow commuter with a flat bicycle tyre, she delivered both person and bike to the nearest station, thanks to her e-bike’s capacity and power.

Campbell’s motorised micro-transit is a magnet for good vibes, and in the three years she’s been riding, she’s become a strong advocate for e-bikes

She also happens to be City of Sydney’s Manager, Cycling Strategy, so it helps that she can endorse firsthand a form of transport that might just be the solution to our city centres’ congestion.

“Electric bicycles enable anyone to cover 10, 30, 50 or even 75 kilometres in a single day.” Jake Southall, Sydney Electric Bikes

“We can see that the growth of e-bikes in Australia has been phenomenal in the past few years, following the trend in Europe where a large proportion of bikes sold are e-bikes,” she says.

Across the world, commuters are embracing e-bikes. In China, sales have skyrocketed from about 300,000 in 2000 to almost 33 million units in 2016, and in Europe market research analyst Technavio predicts a compound annual growth rate for the e-bike market of 18 percent between 2018 and 2022. Paris has a new state-funded scheme providing 10,000 e-bikes for long-term rental to encourage cycling in the city.

“Once you’ve gone electric, you never go back.”


Hope for a gridlocked planet

Individuals and governments alike see the e-bike revolution as a ray of hope for the planet’s environmental woes. Reducing emissions is currently the world’s greatest environmental concern, and in Australia, annual fuel use contributes more than five tonnes of carbon emissions per household.

Across the globe, urban transport is at crisis point, with gridlock a daily reality. But the cars keep coming. In Victoria alone, another 500,000 cars are expected to hit the roads over the next five years. The latest census shows 73 per cent of Sydney commuters – that’s almost 1.3 million people – still drive to work.

Public transport is crammed, too. The latest census figures show Melbourne has seen a rise of 51,000 people commuting by train since 2011, an increase of 27 per cent – or 57 trains full of people.

The list of car-related woes continues: according to Australia’s Bureau of Infrastructure, Transport and Regional Economics (BITRE) it is estimated that the avoidable cost of congestion for Australian capital cities was around $16.5 billion for the 2015 financial year and its business-as-usual projections of these costs rise to around $30 billion by 2030. And yet just 5.4 per cent of Melburnians walk or ride to work, with Sydney only slightly better at 5.9 per cent. 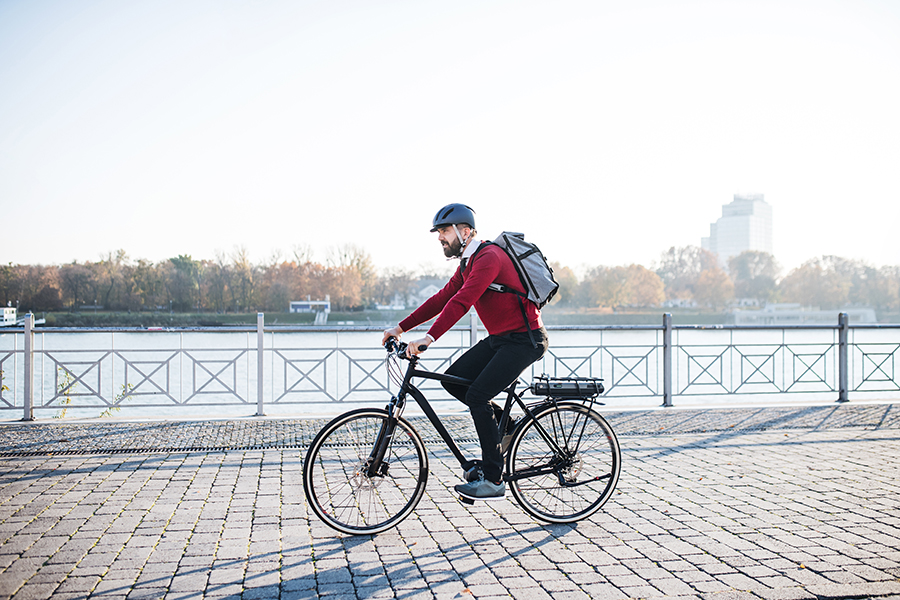 Fiona Campbell firmly believes e-bikes are the answer. “The simple fact is, they make commuting do-able for so many people, increasing the range and ease of travel.”

E-bikes boast a battery-powered electrical motor that can be throttle-only or pedal-assisted, and, is permitted under Australian road rules to give you up to 250 watts of extra grunt (if you add more speed under your own steam, that’s fine). This extra power enables riders of various fitness levels and ages to tackle tougher, longer trips without breaking sweat – an advantage if you need to arrive at work meeting-ready.

“I commute in my office clothes and can always ride to a meeting during the day, which keeps me flexible and efficient,” says Campbell.

Adds Jake Southall: “Electric bicycles enable anyone to cover 10, 30, 50 or even 75 kilometres in a single day.”


Riding into the future

With the cost of new e-bikes ranging from around $1,200 to upwards of $8,000, e-bike sharing operators offer increased accessibility. When Uber bought dockless e-bike and e-scooter sharing system JUMP last year, it reported that trips by new JUMP riders increased by 15 per cent in its first six months of ownership, while use of Uber cars declined by ten per cent.

In late 2018 one of JUMP’s major rivals, Lime, debuted in Australia in Sydney and Brisbane. Sydney’s 300 bright coloured Lime-E electric assist bikes are what the company believes will give it the winning edge after conventional bike sharing operators Ofo, oBike, and ReddyGo all recently failed to catch on in this country.

Lime users download an app, scan the QR code or enter the bike code to unlock it, ride the trip, then, lock and leave the bike somewhere safe. It’s $1 to unlock the bike and 15 cents for every minute that you ride.

When e-bikes first appeared on Australian streets, regulations had to catch up, and safety experts voiced concerns. Fiona Campbell believes the 25 kilometres speed limit and power limits are sufficient for safe use.

The focus of governments, she believes, should be on supporting the e-bike movement and its potential for creating truly liveable cities.

In trials around the world, freight-carrying e-bikes are easing CBD congestion caused by delivery trucks. And here in Sydney, increased uptake of e-bikes by parents on the school run is one of the most exciting developments, Campbell says.

“I see a future where if this city could make our target of 10 percent of trips being made by bike, then what we can give all Sydneysiders is school holiday levels of traffic every day of the year.

“Everyone wants that – even people who drive and are not going to ever change. E-bikes increase the chance of this really happening.”