How to maximise your productivity when working remotely

Your routine may be disrupted by COVID-19, but your work doesn’t have to be. Follow these expert tips to create a remote working schedule that you can stick to and achieve a sense of calm.

Millions of Australians have suddenly found themselves working from home due to the COVID-19 pandemic. Distractions and procrastination are a real threat when your usual routine is disrupted, but creating a schedule can help overcome both these problems, as well as provide a powerful psychological boost.

Aaron Birkby is an executive coach in Queensland who knows this problem too well. “In uncertain times like these, it's easy for our brains to have runaway thoughts and focus on negativity,” he says.

There’s a simple solution to the problem: Routine.

Birkby says, “Having a routine and structure gives us something to focus on and brings back some consistency.”

He recommends starting the day with a ‘psychological trick’ that can be a substitute for the usual commute.

“Get dressed for work and walk out your door. Go around the block if you can. That time we spend commuting is known as the ‘third space’ and it helps us transition from home to work and vice versa. But just closing the front door behind can help your mind shift gear.”

“No one wants to eat the frog, but if you know you need to eat it, it’s better to do so sooner rather than later.”

According to Les Watson, a productivity expert based in Victoria, it doesn’t matter what medium you choose to create a schedule – it could be paper-based, digital or a combination of both. Just make sure to keep it somewhere prominent, so that even if you are distracted by a phone call, your eyes return to it.

The way you divide up your day depends on the nature of your work – for tasks that require deep thinking, block out an hour, while administrative tasks can be done in short bursts.

Many swear by the Pomodoro technique as a time management tool. It involves setting a timer for 25 minutes of concentration, followed by a five-minute break. After four repetitions, take a longer break of around 30 minutes.

Whichever way you go, avoid creating a minute-by-minute schedule that will be impossible to follow and cause undue stress.

Eat the frog and build in breaks

The celebrated writer Mark Twain once said that a person should start their work day by eating a frog. The ‘frog’ is your biggest, most important, and often, the most unpleasant task. The bestselling time management book Eat That Frog by Brian Tracy has repopularised the idea of getting the toughest thing out of the way.

“No one wants to eat the frog,” says Watson. “But if you know you need to eat it, it’s better to do so sooner rather than later. And if you got a choice between two frogs, eat the ugliest one.”

As for when it comes to eating your lunch – resist the temptation to eat in front of your screen.

“The majority of people think that working through lunch is a good idea – but it really isn’t,” says Watson. “We lose focus without regular breaks.”

For the sake of your own productivity, get away from the computer and into another a room – or better still, outside. When you return to your desk, you will feel refreshed.

Most of us are missing our ‘work-wives/husbands’ and the general banter, so use some break time for socialising with colleagues. It will keep morale up, which in turn boosts productivity. 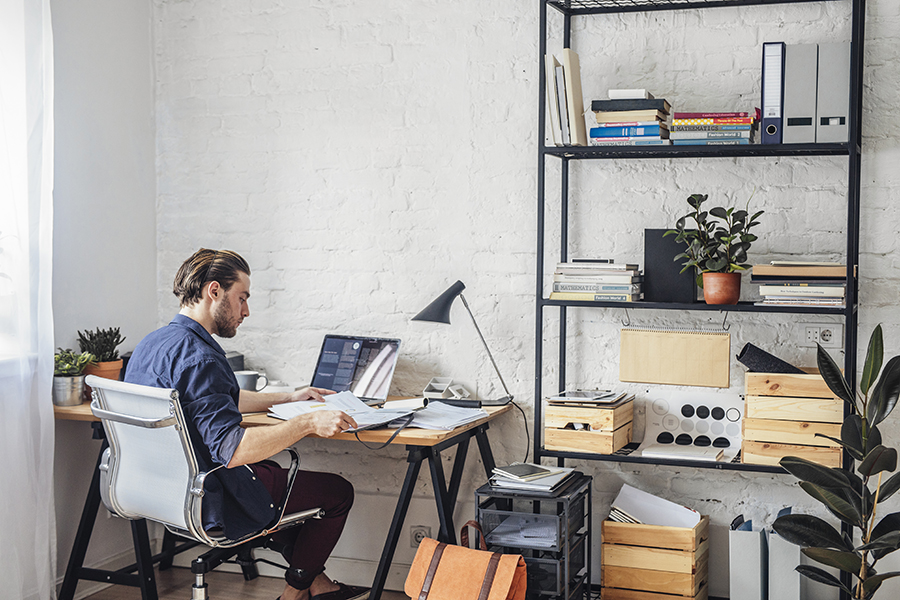 Struggling to stick to it?

If you were the type of person who just rolled with the punches in the office, it may be challenging at first to stick to a routine.

Watson recommends easing yourself into it. “Rather than going at it for eight hours, start small. Tell yourself that you won’t allow any distractions for the next hour.”

He says that setting an alarm or using a Siri or Alexa voice prompt can be helpful for starting and finishing tasks.

“Auditory signals work well because it's like having an assistant come knocking on your door and saying, ‘Your next appointment is here.’ It’s more difficult to ignore than a pop-up notification.”

If procrastination is causing recurring problems, it could be worth creating a ‘Do not do’ list every day.

“I write down things I’m not allowed to do during my work day, like household chores or recording podcasts. I love making podcasts but I know it's not the most important thing I should be doing,” says Birkby.

Don't beat yourself up if at first you don’t succeed in sticking to your schedule. It’s a work-in-progress, so keep tweaking it until it feels right.

“We all need to give ourselves a bit of leeway at the moment. It’s a challenging time and the pace of change is difficult to deal with,” say Watson.

“Don’t be too strict with yourself or set overly ambitious targets.